Base of cadwork elements
All basic elements in cadwork have an axis system. Except for the auxiliary element, room and surfaces, the elements are defined by an axis. The axis spans between point 1 and point 2. The orientation of the axis is defined by the vectors x, y, z.

A vector indicates a quantity, such as velocity or force, that has direction and length.Vectors in 3D coordinate systems are represented with an ordered set of three realnumbers.

Two vectors are the same if they have the same magnitude and direction. This means that if we take a vector and translate it to a new position (without rotating it), then the vector we obtain at the end of this process is the same vector we had in the beginning.

Vector or point
A vector defines a direction and length. A point defines a location. 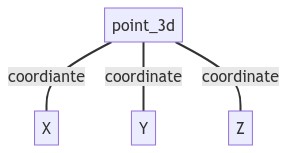 The coordinates of a cadwork point_3d object can also be accessed by its .x, .y and .z attributes.